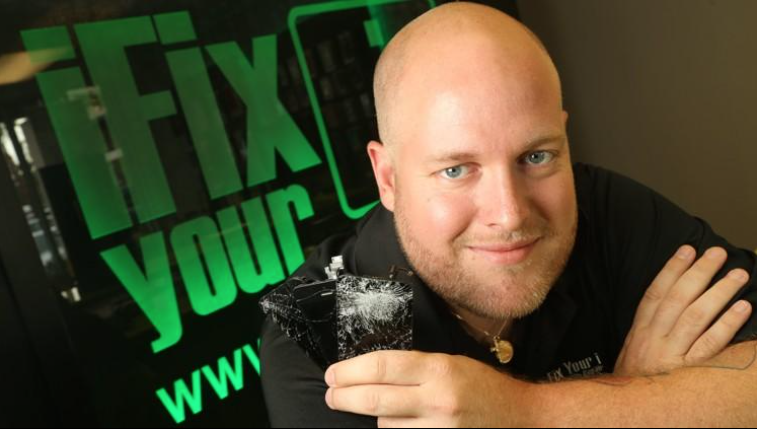 Even though all of life’s problems can’t be fixed, at least your devices’ can with iFixYouri. This is the iFixYouri company history.

Founded in 2010, iFixYouri quickly became known for its expert service of nearly every type of smartphone, tablet, and personal computer.

From phones placed in toaster ovens to fix water damage to iPads dropped from five-story buildings by clumsy owners, we have seen and repaired them all.

After being laid off from a large high-tech engineering firm, iFixYouri founder Christopher Johncke needed work and began fixing computers for family and friends.

Despite his ability to fix other people’s tech issues, Christopher faced his own when his iPhone dropped and shattered one day while out with friends.

Beside himself and with limited options, he did exactly what any other iPhone owner would do: go to the Apple Store.

Once there, Apple quoted him a $200 repair fee that he could not afford .

With no affordable solution in sight, Christopher’s search for a fix began. Little did he know he was the solution all along.

Because computer and handheld tech repairs were like second nature to him, he tested his skills and successfully repaired his phone.

Christopher began marketing his services after realizing that there was a high demand for iPhone repair services, and the rest is history.

“I did this to make some money on the side, and it kept getting busier and busier to the point where I needed to have people come to me instead,” he said. “From there, I tried to grow [iFixYouri] organically.”

Thousands of iPhones later, his business has rapidly expanded and now has a full repair facility servicing customers worldwide.

After outgrowing the trunk of his car, Christopher opened his first storefront in 2010.

iFixYouri’s first official location was a small 400 square-foot space in Lake Park, Florida. Now, its headquarters is about 20 times that size, with over 7,600 square feet.

Within six years, the once shoebox-like space has evolved into a company recognized twice by Inc. Magazine’s 5,000 Fastest-Growing Private Companies, with 10 walk-in locations, in three metropolitan cities, and two states.

Two more stores will be added to the list soon.

We are your go-to, one-stop-shop for professional tech repair services, parts, tools, and how-to tutorials.

Our skilled technicians and friendly operators are here for you no matter what your gadget problem is.

iFixYouri offers a wide range of repair services for many different devices.

We repair nearly all major brand tablets, smartphones, and computers. Don’t see a repair listed? Give us a call, chances are we can fix it! Our customer support staff is standing by to help you out.

Our repair services encompass everything from seamless glass repair for your cracked iPhone glass, to the high success rate of severely water damaged devices.

At iFixYouri we stand proudly behind all fixes and services we provide and exclusively use high-quality parts for all iPhone repair, iPad repair, and all other device repairs. We carry 1-year warranties on all screen replacements and strive for 100% customer satisfaction.

Beyond the success of his company, Christopher believes the most satisfying part about working for iFixYouri is being able to work with a great team to help solve people’s tech issues similar to the one he had ten years ago.