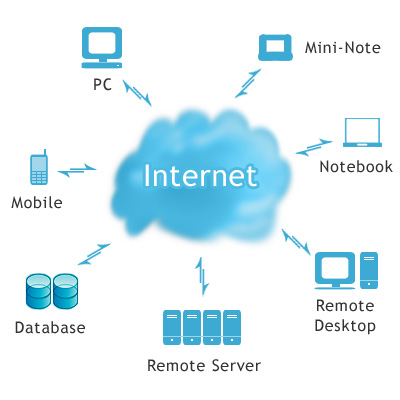 Cloud computing has become immensely popular, thanks to the simplicity with which it allows access of your information from anywhere in the world. Now, with the rise of the mobile device as one of the most common ways to access the internet, cloud computing is easier and more convenient than ever.

Not everybody knows all of the ways they can access this — any iphone, iPad, tablet or smart phone will do — but some people aren’t even familiar with cloud computing itself, and the whole thing may initially seem intimidating, or at the very least unsafe. This post will hopefully clear a lot of that up for the beginner.

What is Cloud Computing?

Cloud computing is a somewhat vague term. In its essence, it refers to the use of storage or software that can be shared, used, edited, or otherwise collaborated upon from various different devices at the same time, thanks to an interconnected network (sometimes also called distributed computing). Everything from virtual business infrastructures and internet data storage to Google Drive — even multiplayer video games — can be considered cloud computing. Honestly, due to the rise of sharing sites thanks to social media, the lines between so-called cloud computing and the internet itself are blurring. Suffice it to say: if you can share, you’re on the cloud.

The simplest way to use your mobile device to access cloud computing is through various apps. Google apps such as Drive, Gmail, and Google Calendar are simple examples, as are communication vehicles such as Skype or YouTube. But let’s look at some of the apps more specifically tailored for businesses.

Dropbox – Dropbox is a great service that allows the user to share and store files and folders, which can be accessed by others thanks to file synchronizations. It can also synchronize this data on one’s home computer. It’s a very useful tool when sharing large files which can’t be emailed, or trying to read something on your iPhone or iPad that you just can’t store due to memory. There are free and paid services with Dropbox.

Evernote – Evernote allows you to take notes – including photos, videos, voice recordings, and any other type of information you might think of while you’re waiting in line at the grocery store. Instead of the less efficient notepads that most mobile devices have, it will synch up the info with the website (must register an account) so that you can also access them with your home computer.

Basecamp has four different plans available starting at $24 per month right up to $149 per month and all accounts have a 30 day free trial.

Xero – From Wikipedia: “Xero is an online accounting software product for small and medium-sized businesses, as well as personal finance. [It] allows business owners and their employers, accountants, bookkeepers and other financial advisors access to up-to-date financial records in real-time with the only system requirement being a suitably-configured internet browser.”

This is for people who want constant access to their business finances.

Logmein – Logmein allows for remote access to computers via your mobile device – anything from remote printing to desktop sharing. Services range from the free services to various paid services.

Carbonite – Carbonite is an online backup service that provides unlimited backup space to consumers and small businesses.  Available to both Windows and Mac users. This is a useful tool for backup and recovery issues.