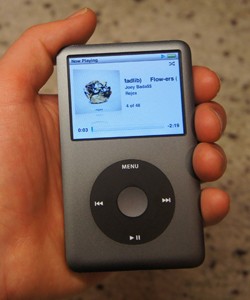 I got my first iPod in 2005. It was a sturdy little piece, handheld, shiny, beautiful, with a stylish and easy click wheel in the middle of it. I loved it. This was before anyone ever heard the word “iPhone” or “mobile device” — it was a way to listen to music or watch videos, a place to put audiobooks or photos. It was the first portable digital device I had ever owned.

Get ready to kiss the click wheel goodbye. This is the year the iPod classic will die.

At Apple’s upcoming keynote event, we’re expecting the launch of a new flagship iPhone 5S, a cheaper plastic iPhone 5C, and a reduced-price iPhone 5 to round out Apple’s iPhone product lineup. Each of these devices will have the same screen size and aspect ratio, and include Apple’s Lightning dock connector, which was introduced with the iPhone 5 in 2012. New iPads are also expected to make an appearance.

One thing we’re not expecting to see Tuesday? A new iPod classic.

Unlike the iPhone or the iPod Touch, which max out its memory at 64 GB, the iPod Classic still has 160 GB of storage, enough for 40000 songs, 200 hours of video, or 25000 photos, making it a convenient device for storing your data. As a music lover, I have my entire music collection on my iPod Classic, a collection that just would not fit on an iPhone or an iPod Touch.

The foreseeable problem is one of manufacturing — while the iPod Classic has a hard drive, the newer Apple products run off flash storage. It only makes sense from a production standpoint that Apple will phase out the Classic in favor of a new iPod Touch, perhaps one with slightly more memory.

So, for the time being, you can still store your music on an iPod Classic or iPod Shuffle, all 40,000 of your favorite songs, until Apple finally solves the problem of storage. We’ll be waiting to see what happens.