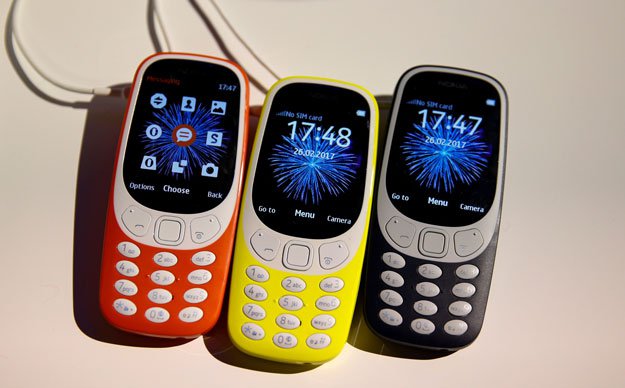 The past is present, masquerading as the future. As we recently mentioned, HMD Global is reviving the Nokia line, rolling out new smartphones under the brand but also bringing back its famed 3310 “dumbphone.” As revealed at Mobile World Congress (MWC), the question was finally answered as to whether or not the 3310 would be updated or be a true copy of the original. The answer is…a little bit of both. While the new 3310 has a similar front fascia as the old one, it appears have a more modern (Scandinavian?) look. The body is slimmer, trimmer, and lighter, and available in a rainbow of pretty colors. Under the hood, you get a 2.4” QVGA display (colors!), dual-SIM (a necessity for the outside-the-US market), a 2-megapixel camera, and even a microSD slot. The legendary battery life is present, but given a huge boost. You’ll get an entire month of standby time and 22+ hours of talk time (the old 3310 had a week and four hours, respectively). Priced at just $52, expect this phone to be a huge seller for industries that need to give employees a cheap, reliable to stay in touch with the home office (think construction and warehouses), as well as emerging markets, like Nigeria, where the old 3310 became a global bestseller. It might have some popularity in the US as an emergency for children, the elderly, and campers, as well as fans of Snake. Yes, you can still play Snake, albeit an updated version with modern graphics.

The phoenix-like return of the 3310 wasn’t the only piece of regressive-futurism at MWC. While Samsung talked about the Galaxy S8 and also debuted a few new tablets, the big talk was about their newest collaboration with…a pencil company. Staedtler, a renowned manufacturer of writing instruments, is famous among architects and engineers for their high-quality Noris wooden drafting pencils. The German company is lending the iconic Noris style, creating a Staedtler-branded S-Pen stylus for Samsung devices. Samsung has needed a larger S-Pen for some time now, especially as the stylus starting to appear even in the company’s laptops. Holding a small, thin stick in your hand and using it to do anything on a screen is evocative of old-school PDAs: annoying. The Apple Pencil was successful in this regard, giving creative types (and really anyone with big hands) a more comfortable form factor with which to use their products in more innovative ways. Teaming up with Staedtler, a brand and image adored by a large portion of these creatives, is a huge one-up over Apple in this regard.

And speaking of old-school PDAs, the original designers of the Psion pocket computer have returned, and wish to act like nothing’s happened in the past 17 years since their last product. Their Indiegogo campaign was recently launched, raising funds to put “Gemini” into production. The microcomputer is essentially a phablet with a full keyboard, and sports 64GB of memory, a 5.7” touchscreen, and, yes, again, a full keyboard. Gemini, if it goes into production, will likely be just as much of a niche product as the original. However, those of us who still desire to feel like John Connor hacking the ATM in Terminator 2 probably number in the hundreds of thousands, so maybe pocket computers could finally carve out a section of the market.