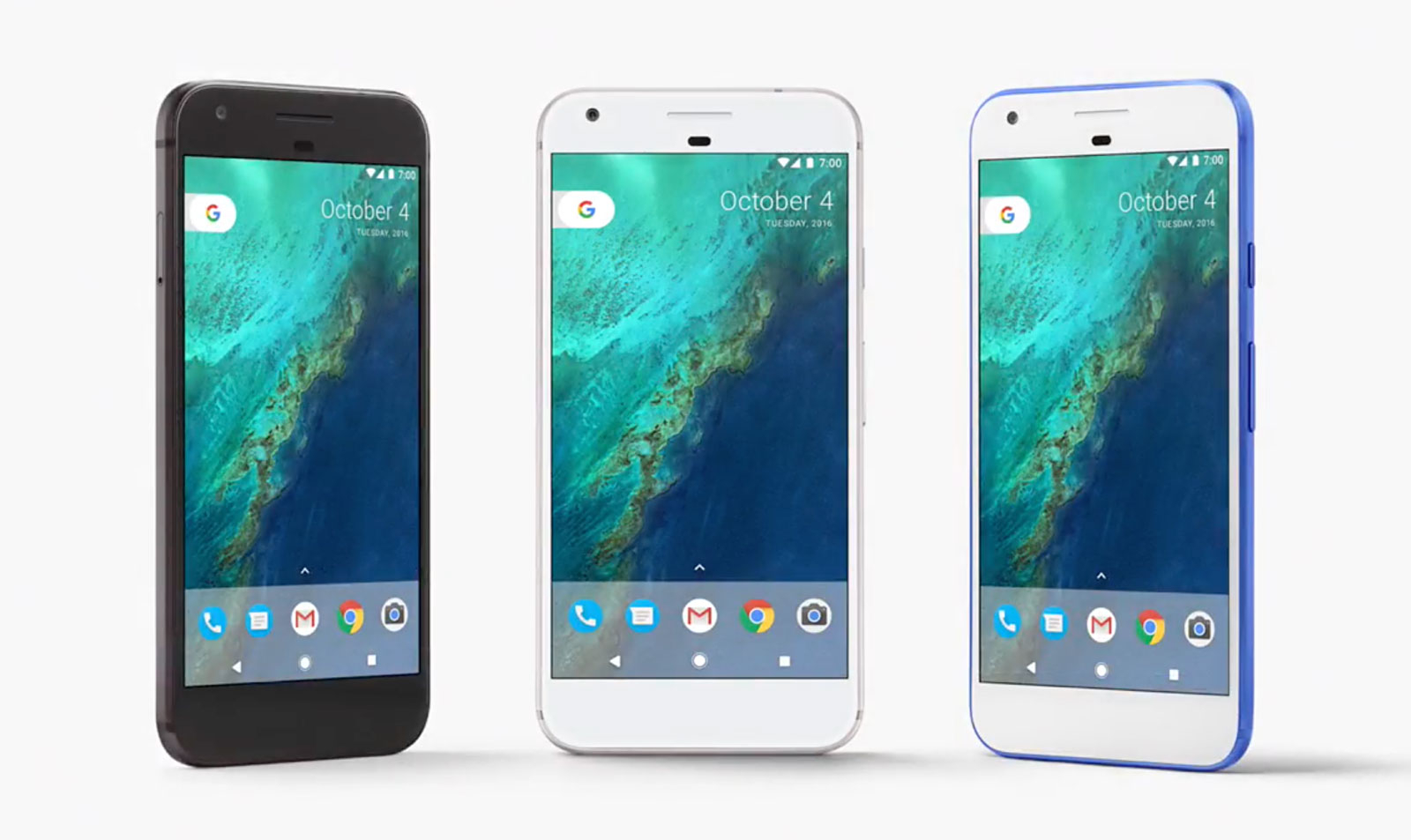 So it’s finally October 4th! The long-awaited #madebygoogle summit is today, and iFixYouri finally received all of the news that Google said we’ll be talking about for the next 8 years. Will we, though? Is 8 months more accurate? Or 8 decades? It’s tough to decide, since the Google Pixel got leaked yesterday (oops) and we had to pretend to be surprised. Let’s go over what happened in the two-hour long presentation.

Things started out light, with a short clip featuring Bertram and Dinesh from Silicon Valley. Bertram says he’s been getting Google products in beta tests and also an invite to a wild afterparty with Sergey Brin and Larry Page. Dinesh is jealous and so are we.

Sundar Pichai comes out to deliver the keynote, just past his one-year anniversary as CEO of Google. He gives a brief history of the connectivity…

…and states Google’s goal (of this press conference, at least): an “AI-first world.” Pichai talks about Google Assistant, which we covered in our article on Google Allo, and how it’ll work as an interface to your own “personal Google.” Security was mentioned, with personal information staying on your device, and given some interesting examples of use. We liked the idea of having it remember the combination to your bicycle lock; just say “Remember my bicycle lock combination” and recite it, Assistant does the rest. Simple, but cool.

Pichai also mentioned Google’s database of 70 billion facts on human interaction and how they’re using it, from advances in their translation program (something called neural machine software giving more realistic translations) to text-to-speech software giving context and emotion to responses. Also, their machine-learning tools can finally determine what bears are doing in photos.

It sounds silly, but identifying rocks in a photo (essentially gray-brown blobs) is a huge step. Rick Osterloh, former president of Motorola and Google’s hardware chief, stepped up next, and could barely contain his excitement.

After a brief talk about keeping up with the demands people have for their personal tech (including a great line: it should “just work for you”), he unveils the Google Pixel, their latest contender in the smartphone market, and brings Product VP Brian Rakowski up to demo it.

Pixel is a very attractive smartphone, with a polished aluminum body and a half-glass back where the fingerprint sensor lies. Colors include…erm…Quite Black, Very Silver, and the stunning Really Blue. Its operating system is Android but sleek, similar to Chrome OS, and designed around Assistant. The most important feature of this integration is that Assistant is great at reading contextual clues. Long-pressing the home button brings up Assistant, and swiping up shows you information related to what you’re currently looking at. Or if a friend texts you asking if you want to visit her in New York, you can just bring up Assistant and ask “How much are flights?” and you’ll get a quick list showing you travel options to JFK or LaGuardia. We’re curious how it will know whether or not to look for context clues, but we’ll just have to wait and see.

Another feature that previously didn’t get any hype is the Pixel’s camera. Citing a rating of 89 by DxOMark.com, the highest of any smartphone camera (the iPhone 7 got an 86), the 12.3MP f/2.0 camera is seriously the best smartphone camera out there. Just take a look.

All that with no camera bump! Other camera features include 4K video, a Smart Burst mode (that takes several photos in quick succession and automatically chooses the best one) and HDR Plus, a high-quality pixel-by-pixel dynamic range setting. Also: zero shutter lag and the shortest capture time of any phone tested. A redesigned stabilization feature uses the Pixel’s internal gyroscope 200 times per second to deliver smooth video without the wobbly effect of digital methods. With a subtle jab to Apple, Brian announced that all Pixels offer unlimited photo and video storage on the cloud, even with 4K video.

And while we’re on the subject of subtlety:

Sabrina Ellis, director of Product Management, came out next to announce some hardware features. Without stating the battery life of the Pixel (which may actually say a lot) she did mention a fast charger, similar to that in newer Samsung Galaxy models, capable of charging 7 hours of battery life in just 15 minutes, hopefully without anything blowing up. The phones will ship with Nougat, the newest Android software version, and new updates will automatically download in the background and kick in at the next restart, taking a cue from Google’s Chromebook laptops.

The devices will also come with a “quick switch adapter” for transferring contacts, messages, photos, etc., from your old phone directly to your new Pixel, no other hardware needed. Any difficulty with all this new? Every Pixel has 24/7 live customer care with a screen-sharing option, making it great for older folks.

Now for some not-so-good news. The only US carrier currently offering the Pixel is Verizon. The phone can also be purchased unlocked, but its price is causing some gripes: $649 for the 5” Pixel and $769 for the 5.5” Pixel XL. Fortunately, a cell-carrier-esque payment plan is available through the Google Store, starting at $29 a month. I will also remind readers that the iPhone 7 was released on the exact same price point.

On to more hardware! The VR team head, Clay Bavor, comes out to discuss the Daydream virtual-reality headset. It’s here we get to see the typical Google outside-the-box innovation: the headset is mostly made of lightweight foam and fabric. Even the viewing box is encased in what seems to be a textured microfiber sweatshirt.

Very odd, but Clay explains that, as the headset is something you wear, it should look like something you’d wear. That actually makes sense! Daydream works similar to Samsung Gear VR or Google’s own Cardboard, in that you need a compatible smartphone (the Pixel, for now, but other manufacturers are working on it) to act as the screen. A small controller, with two buttons, a touchpad, and full gyroscopic detection, hides snugly inside the viewing box when not in use. Extremely low latency (by enabling the VR software to access more processing power when inside the Daydream) increases immersion and reduces motion sickness. More demos followed, including a Harry Potter game, an interactive star chart, and curated StreetView tours, including…uh…SheepView.

Mario Quieroz from Product Management talks about Google WiFi, a revamping of their OnHub devices. It’s simply a modular wifi system; plug one into the Ethernet, and the others act as additional transmitters giving strong, overlapping coverage to the whole house. It also actively manages networks, seamlessly switching routers as a user travels throughout their home to whichever connection is strongest. We think this is very cool, and useful for large households with several devices in each room.

Rishi Chandra came out next, very likable but also extremely long-winded. His topic is the Google Home device, Google’s competitor to the Amazon Echo.

Google Home, about the size of a Yankee Candle and featuring three powerful speakers, talks to you using the aforementioned Google Assistant, and Rishi went on and on using several examples, not all of them thrilling. “Ok Google, play me that Shakira song from Zootopia” and, lo and behold, Assistant finds it for you and starts playing! More interesting is Assistant’s integration and personalization across all of your devices; tell your Home device to add pasta and tomatoes to your shopping list then, at the grocery store, ask Assistant to show you said shopping list and bam!

When you get home, put your pasta in boiling water and tell Home to set a timer for 11 minutes. Tell it “Good morning” and it gives you info on the weather, your commute, appointments you’ve set, and more while you sip your coffee; Rishi calls this MyDay and compares it to the presidential daily briefing. It seems like the neatest features of Assistant are its most basic, and that’s important for achieving the type of integration into day-to-day life that Google wants.

The last speaker, Scott Huffman, talked about the nerdier side of Assistant and how Google will work with developers to utilize it. A devkit, Google SDK, will be launched to help programmers and companies work with the new software.

After the rudest ending ever to a press release (“I’d like to say thank you, and goodbye to everyone on the livestrea-” followed by a LIVESTREAM HAS CLOSED placard), we think that was a fairly satisfying expo, though not as groundbreaking as Google made it out to be. Of course, we’re excited about the Pixel phone. Google’s current Nexus line of smartphones are of very high quality and extremely well-reviewed. We’ve played around with Assistant and, although we do like to poke fun, it is groundbreaking and it’s easy to agree with Rick Osterloh about AI being the link between software and hardware. Google WiFi isn’t breaking new ground but it’s a great, affordable solution (better than purchasing routers separately and linking them together manually) to a common issue. The potential success of Google Home is up in the air if the dozens of people who bought an Amazon Echo are any indicator (we kid, we kid). I guess we’ll find out in 8 years. Ok Google, set a reminder for October 4, 2024.

Our technicians are already doing their homework and eagerly anticipating the first Pixel test devices, so go ahead and order one if you’re interested; if anything breaks, you can send it to iFixYouri and we’ll get it back to you good as new.