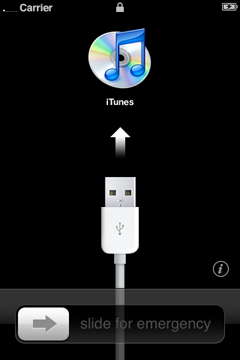 A question we often get at our retail stores is: how do I put my iPhone or iPod Touch in Device Firmware Upgrade (DFU) Mode? Some of you might be asking: “Why would I want to put my phone in DFU Mode?” DFU Mode has many different uses, but the most common is jailbreaking (we don’t recommend doing so). Another common use is implicit in the name – to upgrade (or downgrade) your fimware, which implements network and security protocols for wireless routers.

It’s a very easy procedure — all you need to do is follow the simple steps below.

1) Plug your iPhone or iPod Touch into your computer with a USB cable. Make sure that your iTunes is up and running.

2) Turn off your device: Press and hold the Power button until the Power slider pops up. Slide it to the right to turn the device off. Wait for your device to completely power down before proceeding.

3) Press and hold down the Power button for 3 seconds.

4) Press and hold down the Home button for at least 10 seconds, while continuing to hold the Power button down.

5) Release the Power button, after holding both the Power and Home buttons consecutively for at least 10 seconds. After a few seconds, a message will appear in iTunes letting you know that the device has been detected. The device’s screen will remain blank if done right.

And voila! You’re in DFU Mode. Also, if you get stuck in DFU mode and want to get out of it, just hold the power button and home button simultaneously until the Apple logo appears. Simple as that.