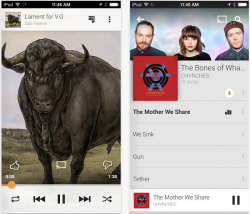 Google has updated its Play Music app for the iOS 7, the new operating system for the iPhone 5 and new iPad models. The folks over at 9to5mac.com explain:

Google has updated its Google Play Music app for iPhone with several new features and a refreshed UI for iOS 7. The app was first released last month but had not yet been designed for the latest version of iOS.

Besides the updated interface, the app includes support for “I’m feeling lucky” radio stations, the ability to search for music and create stations by genre, and auto-playlists.

You can grab Google Play Music for free on the App Store.

– Auto-playlists (including Thumbs Up playlist) added to playlist view

– Added ability to search for genres