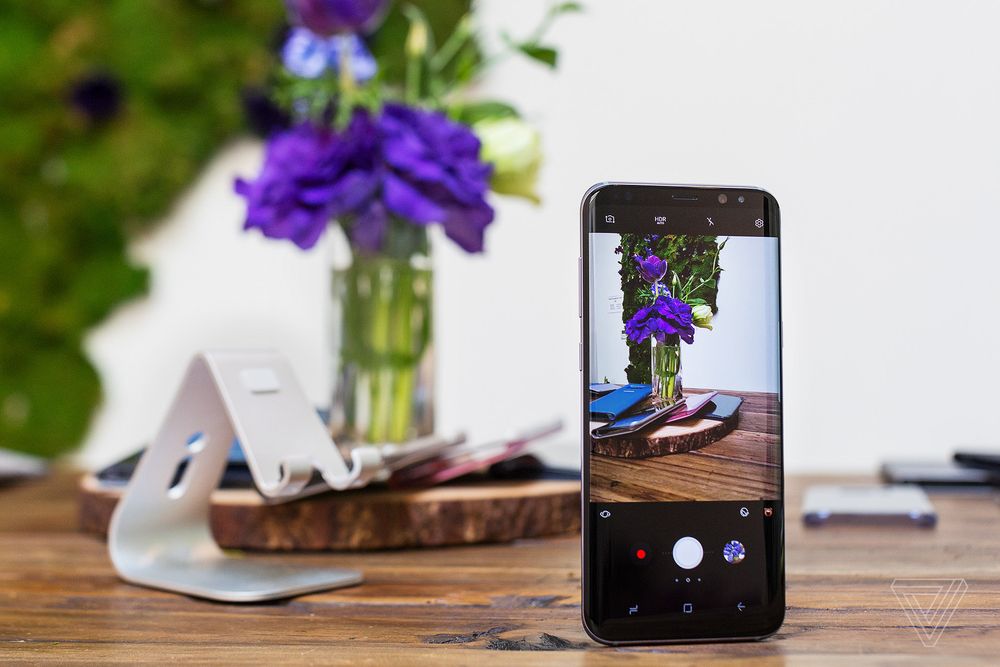 We’ve waited months, and after a particularly anxious morning waiting for 11am to roll around, the wait is over. The Samsung Galaxy S8 is official, and it’s everything we were expecting. Well, it helped that we had a hefty dose of leaks. What we get is a huge redesign of the smartphone and a departure from the design language of previous models.

Let’s talk about bezels. They’ve been slimmed down dramatically, practically scrapping the typical smartphone design in favor of maximizing the on-screen real estate. The physical front navigation buttons are gone, replaced with on-screen buttons that disappear when not in use. The fingerprint reader is confirmed to have been moved to the back, in an awkward position next to the camera lens. There’s no logo or other identifying features on the front, other than the usual cluster of sensors at the top including the front camera, earpiece, iris scanner, and proximity sensor.

There are two sizes of the S8: the “regular” Galaxy S8 will feature a 5.8-inch display, and the Galaxy S8+ will have a bump to a 6.2-inch screen. This is, quite literally, a huge change. The latest in the phablet Note series were 5.7”; the regular-size S8 will be a bit larger than that, and the S8+ will be absolutely massive. Combine that with the minimal bezels and curved edge, and that’s a lot of screen. Oh yeah, the “Edge” display is no longer optional; the screens of both models will curve along the long edge. Both displays are certified as HDR (high dynamic range) by The UHD Alliance.

The specs under the hood are impressive as well. The S8 will be powered by four 2.3GHz cores and four 1.7GHz cores, and the S8+ gets a little boost: four 2.35GHz cores and four 1.9GHz cores. As usual, the US will get a Qualcomm chip (the new 835) while the rest of the world will have to make do with Samsung’s own Exynos 8895. Both devices will have 4GB of RAM, 64 GB of storage (expandable with a MicroSD slot), a USB-C port, and IP68 water and dust resistance. The S8 has a 3000mAh battery similar to the S7, but the Galaxy S8+ packs a 3500mAh battery, which is a 100mAh downgrade from the Galaxy S7 Edge. Is Samsung being a little conservative due to the catastrophic battery failures in the Note 7? We expect the execs to make an announcement regarding that question at some point.

In the camera department, a 12MP rear camera (seems the industry has hit the ceiling in this department; see iPhone 7 and Google Pixel) with optical image stabilization, and the front shooter gets an upgrade to 8MP. Samsung is boasting the S8 will have two connection-based firsts: the first phone with “gigabit-class” LTE connection and the first to carry Bluetooth 5, both of which are pretty cool but not entirely clear at this point.

All year long, Samsung has been pushing their new voice assistant, Bixby. To this end, they added a dedicated hardware button to the device, along the labs. Bixby has a lot of promise; it’s the brainchild of Viv Labs, founded by personnel who were part of the original team behind Apple’s Siri and later acquired by Samsung. Bixby is all about context; it can search for images, translate languages, and give you information about landmarks and icons. Aim the camera at a product, and Bixby will try to help you buy it online. Such a massive leap forward in this kind of technology will undoubtedly have glitches, so we’ll wait until we get some hands-on time before we pass judgement. Samsung also promises to release an SDK for Bixby, allowing third party apps to utilize it.

As we’ve mentioned before, Samsung needs the S8 to be the best phone it’s ever made. The lack of a phablet has left a big hole in the company’s product lineup, and they’re counting on the S8 and S8+ to fill that hole while making us forget about the nightmare PR the Samsung faced in 2016.

Both devices will be available for preorder on March 30th and we’ve been promised shipping in the US on April 21st. It will be launched in five colors: black, gray, silver, gold, and coral blue, and early speculation sees the phone starting at $720 for the S8 and $840 for the S8+. There’s all sort of deals from every major carrier (even Best Buy is offering the device unlocked at launch) so be sure to check with your provider.