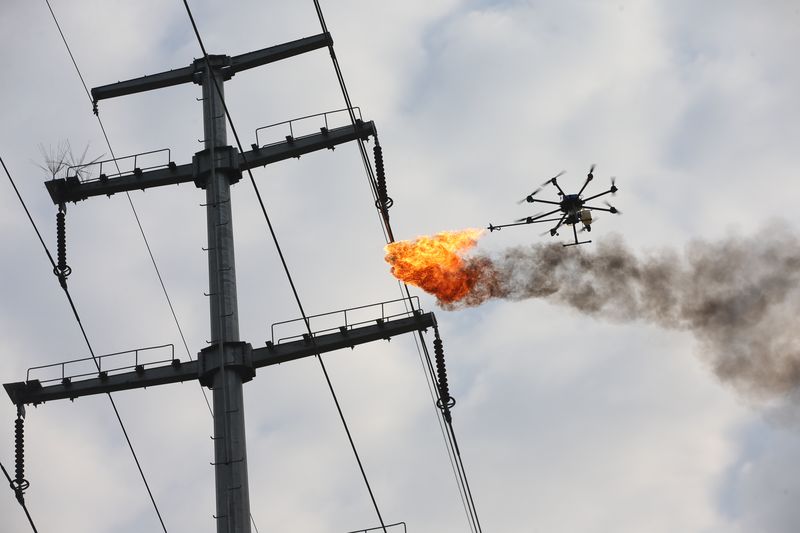 As we continue our terrifying coverage into the increasing dangers of unmanned aerial vehicles, or drones, we look to China to move the hazard level several notches upward. Someone in the Hubei province decided to stick a flamethrower to the business end of a quadcopter and fly it around in a whirling, buzzing inferno through residential neighborhoods. Why? Well, there’s an issue with power lines being damaged by garbage, such as plastic bags, blowing in the wind. The usual method of dealing with this involves a state employee being sent up in a cherrypicker to remove the detritus by hand. As you can imagine, this is slightly hazardous work. The worker could fall, get hit by a fatal jolt of electricity, or both. One of these workers has apparently had enough, and decided to make the task a lot more safe for himself and a lot less safe for the rest of mankind. I mean, just look at it.

Whatever problem he’s solving, he just created a whole lot more. It’s an ingenious idea, but it boils down to “remote-controlled helicopter that spews fire,” which never sounds good in any situation. Why is the gun-copter not okay but flamethrower-copter acceptable? Because it’s on government payroll? Let’s keep this technology in the realm of photography and Super Bowl halftime shows. It’s only a matter of time before the man who speared a drone at a renaissance festival seems like the only sane man around.

Believe it or not, iFixYouri has plenty of experience with fixing a variety of unmanned aerial vehicles (UAVs) from quadcopters to octocopters and everything in between. Several of our technicians are drone photographers and videographers (Andy, for example) and love to help out fellow hobbyists get their UAVs back to working condition*. Whether you have a GoPro Karma, DJI Phantom, or any make or model drone that has an issue with the camera, rotor, or anything else, get in touch with iFixYouri and we’ll be happy to get you back to the skies!

*“Working condition” does not include attaching flamethrowers or other weapons.