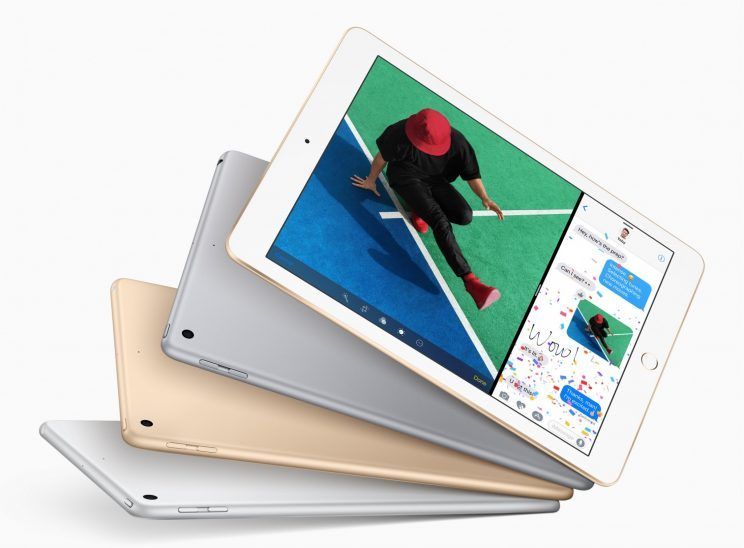 We got so excited about the new red iPhone 7 this week, we almost forgot about the other product announcements from Apple. In a quiet press release (no “one more thing”!) the tech giant debuted…the iPad. Perhaps intended as a replacement for the iPad Air 2, the (new) iPad is officially the fifth-generation iPad, marking the Air and Pro lines as offshoots from the official main line. If this is the case, it’s odd that the end result is essentially a cross between the Air 2, the original Air, and the 9.7” Pro while not really being any of those.

As part of their announcement, Apple announced that they would not be updating any of the current iPad lines besides the two-year-old Air 2. The 9.7-inch iPad will include an Apple A9 chip, which is an improvement over the A8X in the two-year-old Air 2 but not as powerful as the Pro’s A9X. It’s a little thicker and a little heavier than the Pro and Air 2 (which have the exact same dimensions), being a little more than a millimeter thicker and ever so slightly heavier. The screen takes a major downgrade even from the comparatively ancient iPad Air 2. The LCD which is no longer laminated to the front glass like in the Pro, Air 2, and Mini 4. Our repair technicians are jumping for joy (much easier to repair and replace) but that tiny gap between the LCD and glass will hurt brightness and contrast. There’s also no anti-glare coating.

The cameras are borrowed from the Air 2: you get an 8MP flashless rear shooter and a 1.2 FaceTime camera on the front, whereas the Pro has 15MP and 5MP respectively. We mentioned the processing cheap being a bit of a downgrade from the Pro but you get the same 2GB of RAM; presumably, Apple doesn’t want consumers to miss out on the multitasking features introduced in iOS 9 or suffer any slowdown. Of course, you get TouchID and a headphone jack, but that’s about it. You won’t have a lot of the desirable features of the Pro, such as the gorgeous True Tone display and DCI-P3 color gamut support, or support for productivity accessories like the Apple Pencil or Smart Keyboard. So why would anyone buy such a Frankenstein’s monster of a device, about as confused with its identity as we are with its function? The price. In a surprise move, this 5th-generation iPad will be…a budget iPad.

As per usual, the new iPad will be available in Wi-Fi-only and cellular, and in two different memory sizes. 32GB models cost $329 for Wi-Fi and $459 for cellular, and 128GB models are $429 and $559 respectively. Rose gold is missing from the lineup (boo!) but the usual space grey, silver, and gold colors will be offered. The 9.7” and 12.9” iPad Pros are still being sold for the same prices and capacities as before.

Us here at iFixYouri are a little confused as to what exactly Apple’s plan is here. We get that they want to bring the iPad line back into focus and are seemingly debuting this as their next tablet flagship, but what of the iPad Pro? Was that not the flagship, Tim Cook’s darling? Offering a cheaper gateway into the line is smart but not really part of Apple’s credo. The iFixYouri technicians are happy, though: non-laminated screens means faster (and potentially cheaper!) repairs for our customers.