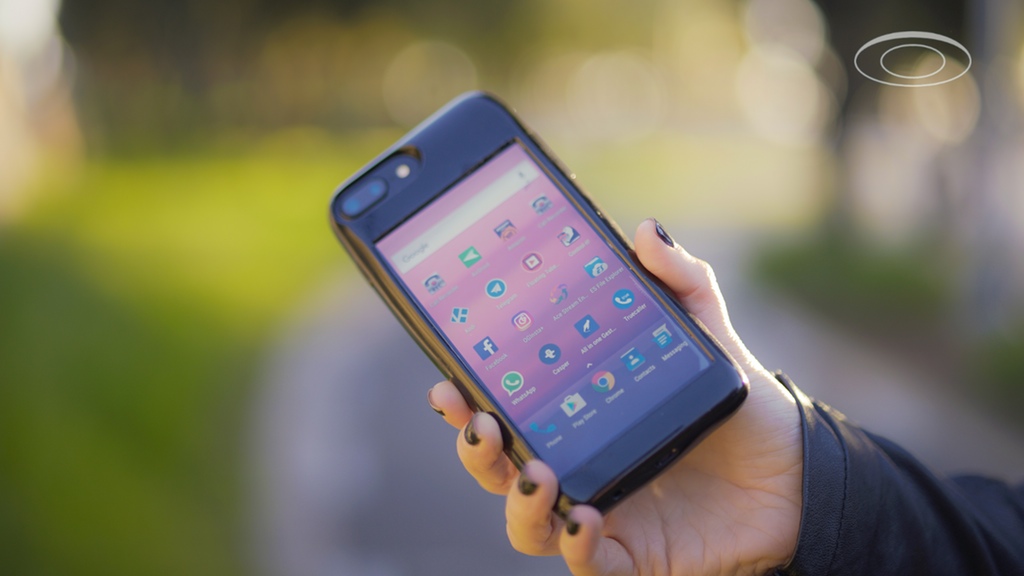 If you’ve ever dreamed of running Android on an iPhone, you’re not alone. It’s possible, but usually involves some intensive phone-hacking and some serious warranty-voiding. Apple designed iOS to be totally locked down, making it one of the more difficult things for a hacker to do and never results in something that’s commercially viable. One company, Esti Inc, decided to put Android on iPhone by physical methods with the Eye case. The Eye is an iPhone case that takes the most simple, Occam’s-Razor route to pairing the two mobile operating systems: put one on top of the other.

The result is crazy but we can’t find fault in it. When in place, the Eye creates a Frankenstein’s Monster of a device. The back of your device becomes another screen, ostensibly another phone running stock Android. It acts as sort of a technological parasite by accessing the speakers, cameras, and microphones of Apple’s device, but other than that, the Eye works like a standalone Android phone. Two SIM card slots (very important for selling outside the US, as we’ve mentioned before), a microSD slot, a 3.5mm headphone jack (great for iPhone 7!) and contains its own battery and NFC chip. The screen is a basic 5-inch AMOLED display, but you can flip it over if you want to watch Netflix.

So, this isn’t exactly the same as running Android on your iPhone. Sure, it adds some features that your iPhone doesn’t have, but nothing that a regular Android phone can’t do. If you’re someone who needs to carry around two devices (like marketing types running social media) the Eye actually sounds like a good idea: keep your company Twitter, Facebook, etc logged in on the Android side. Esti Inc. hasn’t gone into detail on the internal specs of the Eye, but given the low price (the Kickstarter early-bird is $95 without 4G, or $129 with) it’s hard to imagine a powerful full Android experience from this piggybacking thing.
If you’re planning on backing the Kickstarter, be careful. Esti Inc. is a brand-new company with no prior products and no history, so invest accordingly. A few of us at iFixYouri think it’s a really neat idea, despite what the naysayers around here are mumbling. Soon, we won’t be able to hear them over the nightmarish sound of two cellphones ringing simultaneously.